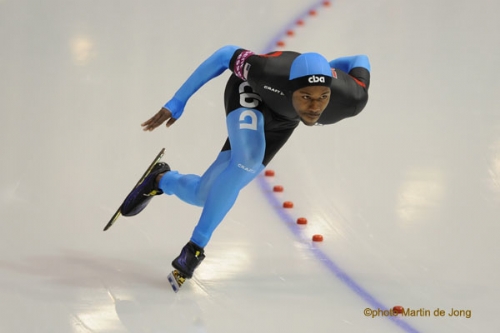 Showing no signs of slowing down after his historic defense of the Olympic 1000m title in Vancouver, Shani Davis is poised to continue his pursuit of speedskating excellence for another season.

Shani opens the ISU World Cup speedskating circuit on Friday in Heerenveen, The Netherlands — the sport’s Mecca — on the same track where he closed out last season by claiming the Overall World Cup 1000m and 1500m titles. After a grueling summer of training and strong pre-season performances, the current World Record holder at both distances is leaving nothing to chance this year.

Joining Shani in his quest for more gold is Norwegian commercial banking company CBA, whose Sport Sponsor and Training (SST) program was created to help elite athletes from a variety of sports maximize their potential. Joining Shani on Team CBA is famed American coach Peter Mueller, who has been living coaching in Norway for the past several years.

Shani is also pairing up in 2010 with progressive sport management company World Of Sport, which will be handling Shani’s business affairs in the Netherlands, and which has a track record of supporting international speedskaters and their teams.

Demonstrating his unparalleled versatility, Shani will skate all four men’s distances in Heerenveen:� On Friday, Shani skates 500m and 1000m races, followed by 1500m on Saturday, and concluding with another 500m and 5000m on Sunday.