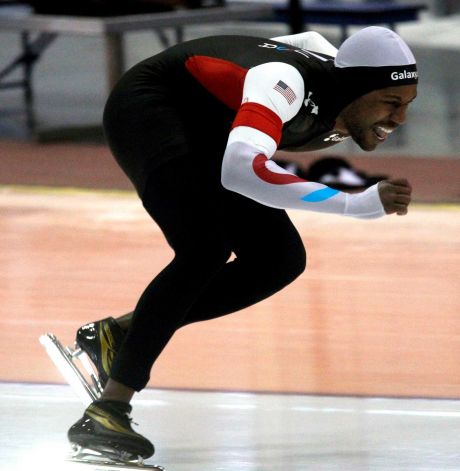 Shani Davis won yet another 1000m race at the U.S. Sprint Championships to continue a streak that’s lasted over 6 years.

Relying on his trademark finishing speed, the two-time Olympic Champion and twelve-time National Champion bested the U.S.’s top sprinters in his specialty distance, winning in 1:08.57, only .12 shy of his season-leading 1:08.45.

Although he won the 1000m battle, in the overall Shani wasn’t able to make up the points deficit he faced following the 500m races. As a result, the former World Sprint Champion will not be on the U.S. Sprint Team competing at next month’s World Sprint Championships here in Salt Lake City.

Davis kept the outcome in perspective: “It’s a disappointing [overall] result, but everything happens for a reason. My top priority this year remains being at my best for the World Singles in Sochi in March.”

On the competition’s opening day Shani simply spotted the field too much time in two 500 meter races – his first since suffering a 4 cm groin tear in November – with only one 1000m race factoring into the combined overall results.

Shani wrapped up the U.S. Championships on Sunday with a silver medal at 1500m, qualifying for that event at the winter World Cups, and, along with the 1000m, at the season-ending World Single Distance Championships in Sochi, Russia, March 21-24.