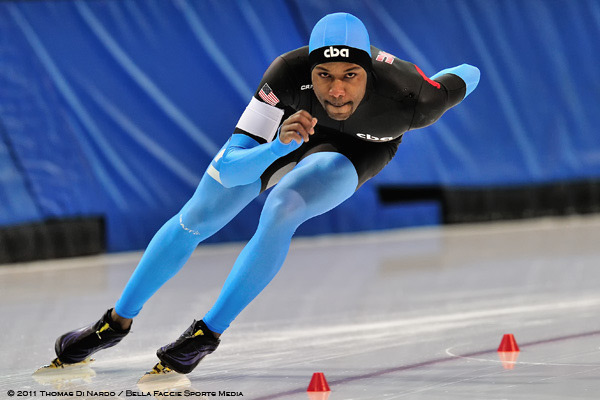 After closing out 2010 with a victory at U.S. Allround Championships, Shani Davis opened 2011 by winning the U.S. Sprint Championships.

The two-time Olympic 1000m Champion continued his world-wide dominance of that distance on the second day of the two-day competition, besting the rest of the U.S. by over a full second in a time of 1:08.18.

Perhaps even more remarkable was his performance in the shorter of the two sprint distances. With the memory of a grueling 10,000m still in his legs from the Allround competition three days prior, Shani skated a season-best 35.15 in the second 500m race. That time was less than a tenth out of first place and tied with 500m specialist and World Cup 500m Champion Tucker Fredricks.

Shani’s overall two-day total of 138,32 was nearly two points ahead of 2nd place Joey Lindsey. Fredricks and Brian Hansen rounded out the top four and joined Shani in earning a berth on the 2011 U.S. Sprint Team.

The 2011 World Sprint Championships take place Jan. 22-23 in Heerenveen, The Netherlands, less than a month before World Allround Championships in Calgary, Canada, Feb. 12-13.

Shani was encouraged by his results in Salt Lake City. “My body feels good and my mind is ready for the challenges ahead…Things are seeming to fall into place naturally [and] I’m very excited to see what this kind of skating brings me later in the season.”

Asked about the chances of duplicating his victorious U.S. Allround and Sprint performances at the 2011 ISU Championships, Shani maintained characteristic modesty: “I don’t want to get too far ahead of myself because there’s an awful lot of [competitors] skating really well.”

Nonetheless, the 2009 World Sprint Champion and 2005 and 2006 World Allround Champion feels confident: “I truly believe that my best skating is yet to come.”