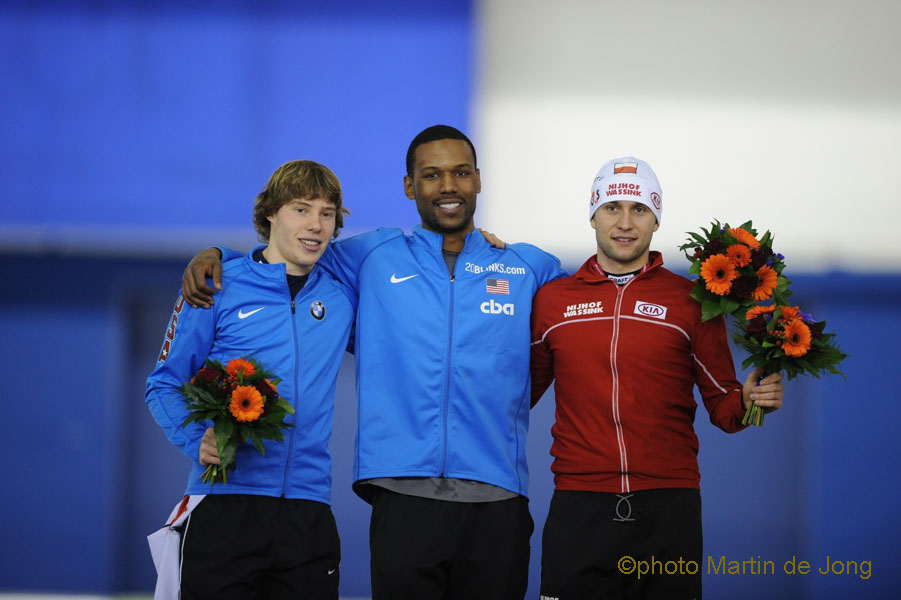 Shani Davis’ march for another World Championship title will have to wait until March.

Russian Ivan Skobrev, victorious in two of four races, become the first man since Shani (2005-2006) and The Netherlands’ Sven Kramer (2007-2010) to win the World Allround title.

In the competition’s opening race, Shani’s fastest 500m of the season was good for gold. His 35.08 was a quarter second ahead of the 2nd place finisher, U.S. teammate Brian Hansen.

It was the two-time World Allround Champion’s 8th gold and 14th medal overall at the Championships.

Feeling the effects of that grueling race, Shani’s 1500m time of 1:43.45 was not enough to scale the leader board on the competition’s second day. “My heart was in it [this weekend], but my body wasn’t.”

Despite missing the podium in the event that he holds the World Record, Shani rebounded with a respectable 10,000m in the final race. His 13:19 was 8th on the day and nearly 10 seconds faster than his winning time at the 2011 U.S. Championships in Salt Lake City.

The World Allround Championship is the granddaddy of all speedskating competitions, first held in 1893. It is the sport’s ultimate test of versatility, with skaters racing four intense distances over two days: 500m and 5000m on Day One, followed by 1500m and 10,000m on Day Two.

Shani won the second of two consecutive World Allround titles in 2006 here at the Calgary Olympic Oval, when he also established the current four-race World Record of 145.74 points. Skobrev won this year’s event with 146.23. Allround point totals are arrived at by totaling a skater’s base-500m time at each distance.

Davis and three-time winner Eric Heiden, the U.S. legend who earned three straight titles leading up to the 1980 Olympics, are the only skaters in history to win both the World Allround and the World Sprint Championship, which Shani won in 2009.

Regarded by many as the world’s finest all-around speedskater, Shani Davis already stands atop the all-time “Adelskalendaren” list, which compiles the personal best times of all skaters, past and present, over the four Allround distances. Shani also owns the current 1500m World Record of 1:41.04.

The World Cup season picks up next weekend in Salt Lake City, where Shani looks to close the gap in the overall 1500m standings. He currently sits in 4th place, only 35 points out of first. “I will continue to meet the challenges that remain for the rest of the season.”

Following Salt Lake City, the international circuit heads back to Europe in March for the World Cup Final and the World Single Distance Championships, where Shani will be among the favorites in the 1000m and 1500m.