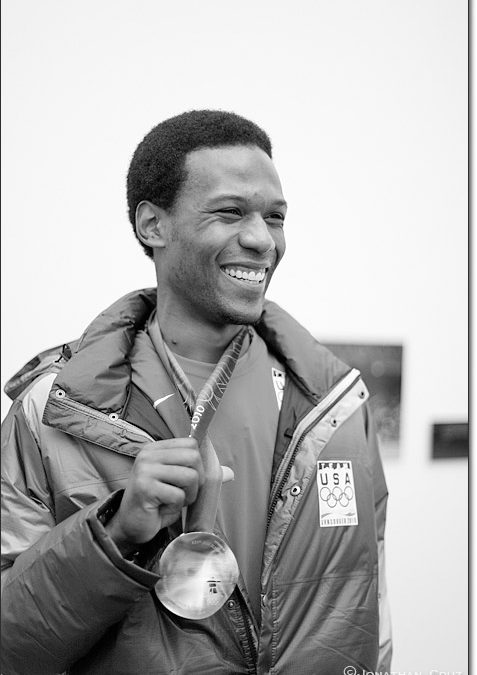 VANCOUVER – 18 FEB 2010
Over 20,000 spectators from all over the world cheered Shani Davis as he celebrated his newest Olympic Gold Medal in a Victory Ceremony at BC Place in downtown Vancouver.

One day after capturing his second Olympic 1000m title, Shani climbed atop the Olympic podium with the knowledge that he has secured a place in Olympic history. “I’m so happy this day came.” The medal was Davis’ third overall. He earned a silver medal in the 2006 Olympic 1500 meters.

After the Victory Ceremony he payed a visit to the World Olympians house, a reunion center for Olympic athletes past and present from all nations. Said co-host Charmaine Crooks (Track and Field, Canada), “This is your home, Shani…it means a lot that you would visit us.”

With a smile rarely absent from his lips, Shani also shared his success with the many volunteers who lined the path back to the Olympic Village, accommodating everyone who asked to hold his gold medal. “I’m honored by how much this means to so many people…at the end of the day, the Olympic Spirit is about the volunteers.”

Training for the two-time Olympic Champion resumes on Friday at the Olympic Oval. Davis faces the top sprinters and distance skaters in Saturday’s 1500 meters. “It’s the race of kings…its the big prize.”