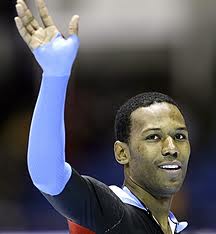 VANCOUVER OLYMPIC OVAL — FEBRUARY 13, 2010
Shani Davis got off to a solid start in his 2010 Olympic campaign.

Racing the 5000m with Dutch favorite Sven Kramer, who won the race in an Olympic record to earn his first Olympic Gold Medal, Shani finished with a time of 6:28.44. Despite falling far behind Kramer, Shani gave a strong effort over the full 12 1/2 laps. “I got a little too into keeping up with Sven in the first 4 or 5 laps. My legs hurt at the end, but now I’m used to that feeling that I’ll have in the 1500m.”

Overall Davis was pleased with his effort: “I’m happy. That crowd…it was fun…it was going through me and i still feel very excited…now I know what to expect for the next races.”

Shani will get a day of rest and switch gears for his next race, the 500 meter sprint. Few athletes skate both the 5000m and 500m in the Olympics, but Shani’s versatility is unparalleled.