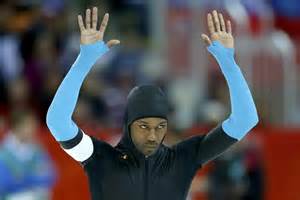 With the Sochi Olympics in his rear view mirror, Shani Davis turns attention to unfinished business on the World Cup circuit.

The 57-time World Cup winner, regrouped and refocused after disappointing Olympic performances, looks to re-assert himself at the remaining World Cup events in Inzell, Germany, this weekend, and in The Netherlands.

Shani is the winningest skater on the World Cup circuit this season, taking three of four 1000m contests and one 1500m race. Those stellar results put him on top of the Overall 1000m and 1500m World Cup standings.

Shani also has a commanding lead in the Grand World Cup, a title he has not yet won in his remarkable career. Introduced in 2012, the Grand World Cup identifies the season’s top World Cup performer across all distances, awarding points for top-5 finishes at each distance. Shani finished third the past two seasons, although he would have already won the Grand World Cup three times (2009, 2010, 2011).

Shani has won more races on the World Cup circuit than any U.S. man, and only Canadian sprinter Jeremy Wotherspoon has more in a career (67). He is also one of only three men to have eclipsed 10,000 career World Cup points.

The season concludes March 14-17 at the World Cup Final in Heerenveen, The Netherlands, where the season titles will be decided.