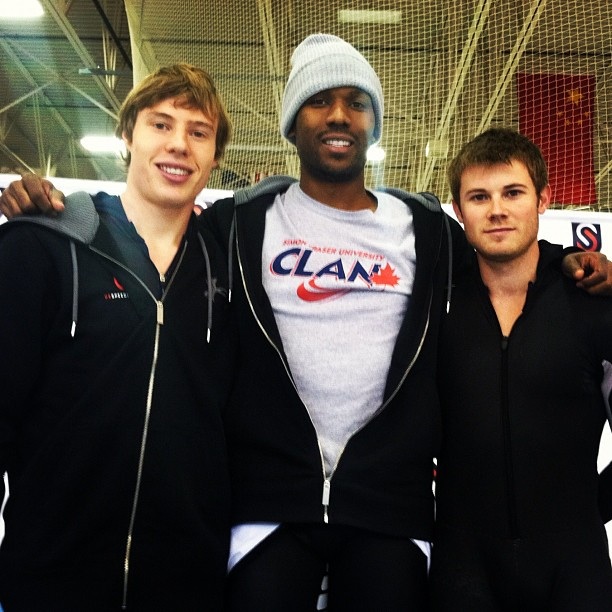 Shani Davis delivered an emphatic message at the first official stop of his 2012-2013 campaign: Full Speed Ahead.

Racing in the season-opening U.S. Single Distance Championships in Milwaukee, Shani successfully defended his 1000m and 1500m titles, the former in near-record time.

At 1500m on Sunday Shani was near flawless, winning in a season-best 1:44.94. That time was more than two seconds faster than second-place finisher Brian Hansen (1:47.12).

“It was strong,” said Davis afterward. “If anything, I was too long, too relaxed for the opening 100m. But I’m pleased with the good feeling I have on the ice.”

After a 16.9 opening 200m split from the outer lane followed by a solid 25.2 first lap, the two-time Olympic 1000m Champion knew his motor was running well. True to form, Shani shifted into his vaunted 5th gear in the final lap, crossing the line nearly a full second ahead of his pair, second-place finisher Hansen (1:09.30).

“It felt really good,” said Davis. “My speed and my corners aren’t all the way there yet, but I feel strong as ever on the straights.”

It was Shani’s third straight U.S. title at 1000m, and record 7th of his hall-of-fame career. In addition to winning back-to-back Olympic 1000m Gold in 2006 and 2010, Davis has won a record five Overall World Cup 1000m titles and three 1000m World Championship crowns. Speedskating’s all-time middle-distance king also owns the current World Record at 1000m (1:06.42), which he established more than three years ago.

Shani is exactly where he wants to be heading into the pre-Olympic year: “I trained as well as I ever have this summer and fall and I’m excited to see where I’ll be in the [World Cup] season. I feel like I could perform well at 5000m, too, but I know I need to get my sprint speed up so that’s what I’m focusing on before the [international] racing starts.”

The international World Cup season opens 16-18 November in The Netherlands.