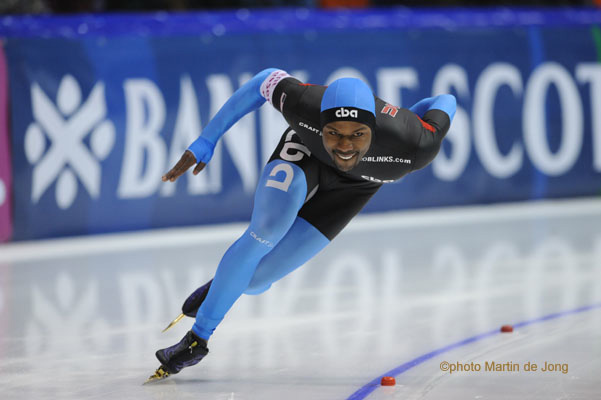 On the 5th anniversary of his first Olympic victory, Shani Davis found a measure of redemption in the city where his Olympic career began.

Racing in World Cup 7 on the Oval where he established the 1500m World Record last season, Shani skated 1:43.38, good enough for silver just behind U.S. teammate Trevor Marsicano, who was only 3/100ths faster, and ahead of 2010 Olympic 1500m Gold Medalist Mark Tuitert. The winning time was well shy of Shani’s record 1:41.04.

Said the twice 1500m Olympic Silver medalist: “The race went to schedule but [coming off a short week following World Allround] I just wasn’t as fresh or strong as normal.”

After skipping a World Cup in Moscow last month to prepare for World Sprint Championships, Shani entered the day fifth in the season 1500m standings. With 80 points earned in Salt Lake he moves to second overall, just 10 points behind new overall leader Marsicano, who did not qualify for the U.S. Sprint or Allround Team.

The results in Salt Lake City set the stage for a thrilling World Cup Final next month in The Netherlands, where the race winner will likely earn the title of Overall 1500m World Cup Champion, a title Shani has held since 2007-2008. “Things are definitely looking up towards a strong finish in Heerenveen [for the World Cup Final] and Inzell [World Single Distance Championships].”

Shani also redeemed his 4th place 1500m finish at World Allrounds last week by clobbering Russian Ivan Skobrev by over four seconds in the day’s penultimate pairing. Skobrev is the newly crowned World Allround Champion and upset Davis and others to win the 1500m at that Championship.

Shani qualified for his first of three Olympic Teams in Salt Lake City in 2002 as a member of the U.S. Short Track Team.