Shani Davis: Better than ever heading into 2010 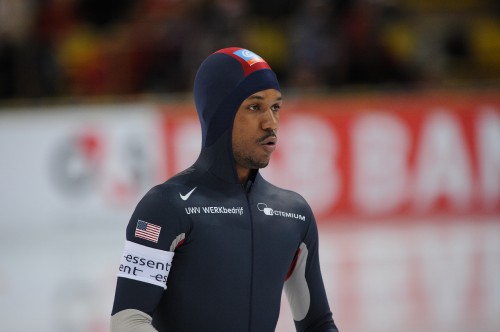 WEST ALLIS, Wis. — Shani Davis looks for a place to sit, then decides to just plop down on the lobby floor of the Pettit National Ice Center, where he can get in some stretching while he’s talking.
There’s a lot to talk about.
He’s a father now, which has given his life new perspective. He’s settled those contentious issues with U.S. Speedskating, looking more like a team player than outcast. He’s thrown off the burden of being a racial pioneer, preferring to be judged by the quality of his times rather than the color of his skin.
More than anything, he’s looking forward to a drama-free Olympics.

“There shouldn’t be a rivalry that tears apart the team,” Davis told The Associated Press during a lengthy interview Tuesday evening. “If it’s negative, it’s not good. I feel like in Torino it was really negative, and it shouldn’t have been that way.”
He’s referring, of course, to his much-publicized feud with fellow American Chad Hedrick, two shining stars of the 2006 Olympics whose animosity toward each other became as much a part of the story as their medal haul. Davis has no regrets about the way he acted, and he’ll never be buddies with Hedrick, but he said their problems “got swept under the rug.”
Maybe that’s because Hedrick faded away after the Olympics, struggling to recapture the form that helped him win a medal of every color. Davis, on the other hand, soared even higher after capturing gold and silver in Italy.

He’s won world championships. He’s set world records (at the moment, he’s got the fastest times ever in both the 1,000 and 1,500 meters). He’s likely to be one of the biggest U.S. stars in Vancouver and, before he’s done, could go down as one of this country’s greatest Winter Olympians.
“I hope they do talk about me some day in the same context they talk about Eric Heiden,” the 27-year-old Davis said. “That would be pretty cool.”
He’ll take his first big step toward the 2010 Olympics during the U.S. trials on the outskirts of Milwaukee, where qualifying for the World Cup season is a prerequisite for earning a spot on the team. The meet opens Wednesday night and runs through Sunday.

Kip Carpenter, a 2002 Olympic medalist who’s now Davis’ part-time coach, said he’s skating as well as ever after overcoming equipment problems during summer training.
“His tempo times in practice are amazing,” Carpenter said. “He’ll come up to me sometimes and say, ‘Are you sugar-cubing that? Are you being honest with me?’ Yeah, I’m being honest. He’s skating really fast. He’s feeling really good about his skating, and I think he’s a lot more relaxed this time around.”
Indeed, Davis does seem more at peace. A lot of that has to do with fatherhood. He’s now got a nearly 2-year-old son, Ayize, a Zulu word that means “let it come.” While a busy schedule keeps dad from spending as much time with his child as he would like, that hasn’t lessened the impact.
“It makes you realize that you’re no longer a kid,” Davis said. “You can’t be a selfish person. It’s not so much about me anymore. It’s about him. It’s an awakening more than anything.”

Davis already has opened plenty of eyes himself. Born and raised on Chicago’s South Side, he grew up to become the Tiger Woods of the speedskating rink, an African-American who rose to the top of a predominantly white sport. Along the way, he endured plenty of ridicule and sneers from both races — which only fueled his desire to prove everyone wrong.
He did just that at the 2006 Olympics, where Davis became the first black athlete to win an individual gold medal at a Winter Games.
These days, Davis said, “I think I’ve grown past the whole thing about being separated by color, thinking I’m doing this because I’m going to be the first black or first African-American. I’m beyond that now. I think I’m more just trying to be the best American I can be. More than ever, I’m united with my country.”

Along those lines, he settled scores that caused a bitter rift with the U.S. governing body, which were based on funding disputes and his belief that some in the sport didn’t want to see too much diversity.
While Davis still isn’t an official member of the national program — oddly, there’s not a biography or any pictures of him in the U.S. Speedskating media guide — he said the relationship is vastly improved over where it was leading up to the 2006 Olympics.
“I don’t have any problems whatsoever with U.S. Speedskating,” he insisted. “We all just want to get the best results possible. There’s a lot of people within U.S. Speedskating I have a lot of respect for. Most of that other stuff was with people who are no longer within U.S. Speedskating.”

He still finds it more lucrative financially to skate unattached. Besides, he’s achieved some of his best results working on his own. While he trains with Carpenter’s team at the Pettit rink, Davis decides on his training program, mixing and matching from various coaching philosophies and relaying heavily on what feels right to him. He logs every workout in a journal, allowing him to accurately gauge just how much progress he’s really making.
“I don’t know for sure, but sometimes it seems like he comes to the rink and says, ‘Hmmm, I think this is what I’ll do today,'” Carpenter said. “It seems like not a lot of planning or thought has gone into it. But if you step back and take a look at it, everything is strategically planned.”

“When you win a gold medal, you want everything associated with that gold medal to feel good,” Carpenter said. “You don’t want any negative associations with it, because it makes it less. It makes that victory a little less. My hope for him, and I assume his hope as well, is that nothing tarnishes the experience if he does it again.”