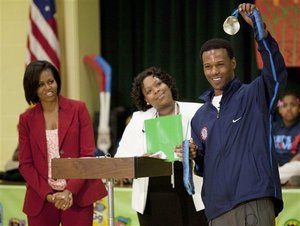 Two-time Olympic Champion Shani Davis’ 2010 Victory Tour is beginning to wind down after three exciting, honor-filled months in the wake of the Vancouver Olympic Winter Games.

Davis was in Washington, DC, May 19 to attend a State Dinner in honor of the Mexican President and his wife. It was his second visit to the White House in as many months.

In April Shani visited the White House in conjunction with 2010 Olympic Team celebrations. During that visit, Shani had the honor of presenting President Barack Obama with a U.S. Team jacket. He and First Lady Michelle Obama also visited River Terrace Elementary School to help promote Mrs. Obama’s Let’s Move campaign. Thrilled students joined Davis and the First Lady for an exercise routine, followed by a discussion about the importance of working hard and eating right to develop a healthy body and mind. Said Shani to students, “If I could tell you one thing about longevity and living a healthy life it would be please start now.”

Davis was also on Capitol Hill with Members of Congress as an advocate for the Olympic Scholarship Program, of which he has been a grateful beneficiary. The Chicago native also made public appearances for Chicago-based companies BP and Deloitte, two proud U.S. Olympic Team sponsors. His simple message to an adoring crowd of Georgetown business students at the Deloitte appearance: “The most important thing is to find out what you have passion for and then work as hard as you can at it…and be sure you are having fun.” He finished the day in Baltimore at a Team USA reception at the Sports Legends Museum in Camden Yards.

April also saw Shani trade in his blades for a microphone as he made his comedic debut at Zanies Comedy Club in Chicago for the Chicago Stand-Up Project, a documentary television series that will air on public television this summer.
CLICK HERE to see WGN-TV interview.

Davis was honored as the ceremonial flag raiser at a Chicago Fire game at Toyota Park. Reminiscent of a speedskating meet in the Netherlands, rowdy and appreciative Fire fans cheered for their hometown hero during pre-game and halftime celebrations. CLICK HERE to see video.

Shani also appeared on the Mo’Nique Show in Atlanta. Fresh off her own victory at the Academy Awards, Mo’Nique challenged Shani and 2008 Olympic decathalon champion Brian Clay to compete in a “Mo’lympics” obstacle course, where Shani settled for a rare bronze medal.
CLICK HERE to view show.

Earlier in April Shani joined Tourism British Columbia in San Francisco to help promote the province that hosted his 2010 Olympic victory. The fastest man on skates opened BC’s experiential exhibit by taking the first run on a thrilling zip-line installed above the city’s streets.

In New York City on April 6, Shani enjoyed a lunch at Sylvia’s in Harlem before visiting speedskating rival-turned-teammate Stephen Colbert at a taping of the Colbert Report to express his appreciation and respect for the Olympic-caliber comedian’s support of the U.S. team.

On April 5, Shani was among the celebrity models at Dressed To Kilt in New York City, a benefit hosted by Sir Sean Connery and the Friends of Scotland. Sporting a traditional Scottish Kilt on the runway, Davis received a roar of approval when he drew his Olympic Gold medal from the Scottish ‘sporran’ accessory he was wearing. Earlier in the evening Shani and Donald Trump swapped stories about spinning hard work into gold.
CLICK HERE to view photos of Dressed To Kilt.

Earlier the same day, BET’s 106 & Park celebrated Shani for his style and for being a positive role model for young people everywhere.
CLICK HERE to view photos.

In March, the Milwaukee Bucks celebrated Shani at the Bradley Center during a game in his adopted hometown. Shani was also honored with a roaring standing ovation at the United Center during a break in the action as the Chicago Bulls took on Lebron’s Cleveland Cavaliers on March 19.
CLICK HERE to view video.

On March 18, the City of Evanston also welcomed Shani home with a celebration at the Robert Crown Community Center & Ice Complex, where Shani learned to speedskate as a youth with the Evanston Speed Skating Club. Shani’s first coach, ESSC founder Saunders Hicks, introduced him to hundreds of well-wishers who came out to celebrate their hometown hero, including dozens of young speedskaters and their families. The Olympic Champion’s message was clear: “If you work hard and believe in yourself and love what you do, you get rewarded for it.”
CLICK HERE to see video.

Immediately afterward, Shani was on ‘black-carpet’ duty at The Shrine in downtown Chicago to conduct NBC.com interviews for the likes of basketball players Lebron James, Derrik Rose and rapper Jay-Z.
CLICK HERE to see the NBC.com story.

Chicago’s very own Olympic gold and silver medalist also stopped by the WGN Evening News to share details of his Olympic journey with viewers across the country.
CLICK HERE to see the interview.