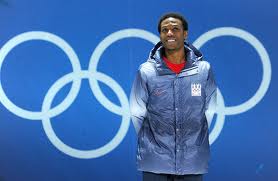 As the 2010 Olympics near their epic conclusion, Shani Davis is savoring every moment.

“I’m really really enjoying this Olympic experience.It seems to get better and better every time.I’m honored to be part of something so universal.”

Shani has been able to spend quality time with family and friends, both in and out of the Olympic Village.His Olympic success has also thrust him into the media spotlight, where he’s been able to find a measure of comfort.NBC, Oprah, and Stephen Colbert are only a few of the media outlets that have sought an audience with the two-time Olympic Champion.

“I’ve tried to accommodate as many requests as I can without jeopardizing my Olympic experience or my preparation for the remaining World Cup races…It does get tiring, but hopefully I’ve represented the Olympic Movement well.”

Shani is also closely following speedskating’s remaining Olympic event, the Team Pursuit.Though he opted out of the event when forced to make a decision in December, he supports his U.S. Olympic Team compatriots in their effort to medal.”If I’d been able to make the decision now instead of last December I’d probably be racing, but now all I can do is watch and support my teammates.It will be exciting to watch.”