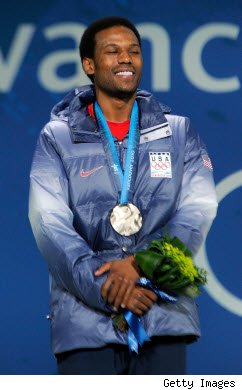 Adding another Olympic Silver Medal to his career Olympic total, Shani Davis celebrated the end of his 2010 Olympic speedskating campaign in gratitude and appreciation.

In front of an enormous crowd at BC Place, Davis was thrilled to receive the 1500 m Silver despite being the pre-race favorite.”I could have easily been less than 2nd…it took so much fight to get this medal.” But he also admitted that his bittersweet result will motivate him to keep skating for another four years. “That [1500m] race has always been my favorite, ever since I was a junior…I don’t quite feel complete yet.”

Following the Victory Ceremony, in which the Netherlands Mark Tuitert stood atop the podium, Davis joined family and friends at USA House in downtown Vancouver to celebrate his 2010 Olympic accomplishments with the U.S. Olympic Committee.

Davis also presented the Order of Ikkos to two of his supporting coaches, Ryan Shimabukuro and Jimmy Jang. The Order of Ikkos was established by the USOC in 2008 as a way to recognize coaches who contributed to an athlete’s medal-winning performance.