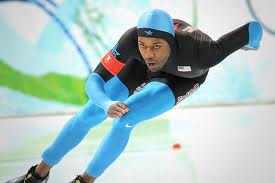 “I’m going to skate my own race, and not worry about what Sven’s doing…It’s a great opportunity for me, to race with him…it would be fitting for Sven to finally win a gold medal: he’s been so dominant since 2006 in the long distances.”

Shani skated most of the 5000m races on the World Cup circuit this year and is ranked 10th in the world. He is treating the Olympic 5000m the same way he has all year: as preparation for the middle distances, 1000m and 1500m.  He won’t hold back, but he doesn’t consider himself a medal favorite, either. “I’ll need lots of good energy today [from my fans].” Click HERE for more from Shani on his 5000m.