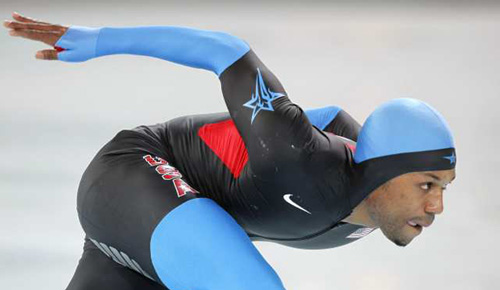 In his first Olympic 500 meter race — only 2 days after skating a grueling 5000 meters — Shani Davis blazed around the last inner turn to finish in 35.45 seconds.

With 5500 meters under his belt so far, and his best race less than 48 hours away after an unusual, lengthy delay due to faulty ice-making equipment, the defending Olympic 1000m champion drew on his inner wisdom and pulled the plug on the second 500. “Part of me wanted to race again, but sometimes my eyes are bigger than my plate…sometimes I want everything…when I know skating the second race isn’t worth the risk right now.”

While the 500m is not long, it is a mentally intense race and the one that carries the greatest risk of injury. Last March at the World Single Distance Championships Davis injured a groin during the second of two 500 meter races, a factor which he took into consideration when making the decision to withdraw.

While his time placed him 18th after the first run, Shani left the Oval feeling like he’s right where he wants to be. “Things happen for a reason. [The delay] made it easier to decide to skip the second race, start resting, and get my mind focused on 1000m. I did a fast one-lap time [25.3] and I know what I have to work on for the next race.”

Tuesday is another practice day before the 1000m, which is set to start at 4:00 pm PST on Wednesday.