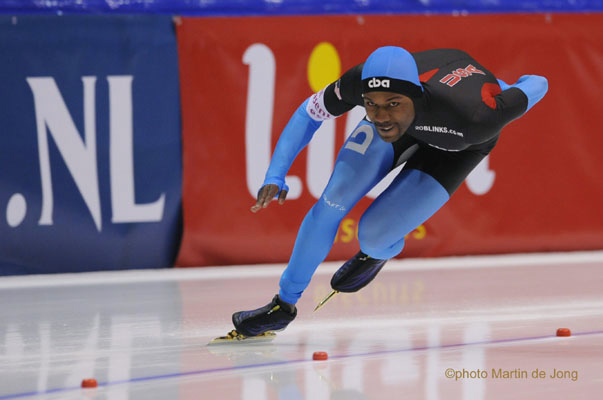 Shani Davis couldn’t have scripted a more compelling scenario as the clock winds down on the ISU World Cup season.

Replace the legendary basketball court with the hallowed Thialf speedskating oval, and you have the 2010-2011 ISU World Cup Final in Heerenveen, The Netherlands, being contested this weekend, March 4-6.

At stake are the 1500m and 1000m Overall World Cup crowns, which Shani has worn since the 2007-2008 season, and which a squad of Dutch skaters would like to claim for their own.

Coming off another podium finish at the most recent 1500m World Cup in Salt Lake City, the math is simple for Shani in Heerenveen on Saturday: Win the final 1500m race, win the overall title.

The current 1500m leader is Shani’s U.S. teammate Trevor Marsicano (301 points), who won races this season in Salt Lake City and Hamar, Norway. The U.S. twosome will race each other in the day’s final pairing.

With World Cup points multiplied by 1.5 at the Final, there are also three other skaters who could triumph in the overall with a win in Heerenveen, including a Norwegian and a pair of Dutch skaters who will be racing in front of their countrymen.

Whatever the 1500m result, Shani faces an even greater challenge in the 1000m on Sunday, where he’ll need some help to prevail in the World Cup standings even if victorious at the Final.

After skipping World Cup events in China and Moscow earlier in the season, Shani finds himself third in the 1000m, 50 points behind Dutch skater Stefan Groothius, who can win the Overall with a top-3 finish even if Shani skates to a 150-point victory.

Following the World Cup Final, Shani heads for Inzell, Germany, site of the season-ending 2011 World Single Distance Championships, where he looks to defend his 1500m World Championship title and regain the 1000m crown that he last won in 2008.