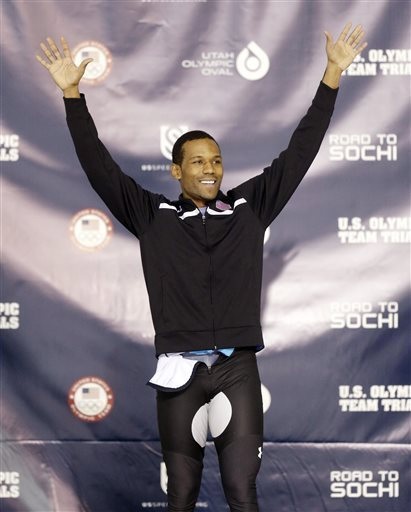 Two-time Olympic Champion Shani Davis handled his business at a key juncture on the Road to Sochi 2014.

Racing in the U.S. Olympic Trials – where there are never any guarantees – Shani notched another ‘Davis Double’, winning the 1000m and 1500m to earn crucial U.S. Olympic Team berths in his historic pursuit of a third Olympic Gold Medal.

The Chicagoan’s fourth Olympic Team qualification came at the same Utah Olympic Oval venue as his first qualification in 2002 as a 19-year-old short-track speed skater.

“I guess it’s full circle. I can still remember the amazing feeling I had [on making the 2002 team] after skating a clutch final race when the pressure was on. It seems like a lifetime ago, but it never gets old to make an Olympic Team.”

At 1500m Shani dominated the field, winning in 1:43.20, a resounding half-second faster than 2nd place Brian Hansen (1:43.70). Racing in the penultimate pairing, Davis opened well and maintained a steady pace throughout the race before using his trademark closing speed to put the competition away in the final 400m.

Said Davis afterwards: “I’m happy with my skating at this point and the result, of course. But I also know there are a half-dozen other skaters from here and other countries that want the same thing as I do.”

With six weeks until Sochi, Shani’s effort at Olympic Trials was focused on executing fundamentals.

“I did what I had to do here, and I still know what I have to do in January and at the Olympics in February,” said Davis following his twin victories.

Shani, who also qualified at 500m, leads a particularly strong trio of U.S. middle-distance skaters into Sochi: Davis, Hansen and Mantia all figure to be among the medal contenders at both 1000m and 1500m.

Davis also earned eligibility to race the Team Pursuit event, in which the U.S. aims to vie for its first Olympic Gold medal on the final day of Olympic competition. The TP squad will be selected at the Games by the coaching staff.

Shani now bears down for his final pre-Olympic training at Milwaukee’s Pettit Center and at the World Sprints in Nagano, Japan, Jan. 18-19.

“The best is yet to come,” predicted Davis.