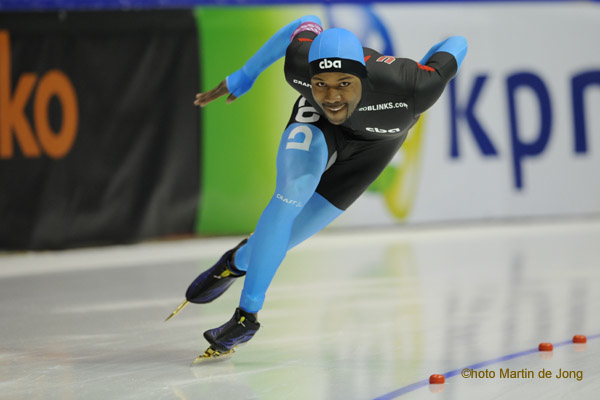 A final-day victory at 1000m wasn’t quite enough to propel Shani Davis to the overall win at the 2011 ISU World Sprint Championships.

But the 2009 World Sprint Champion concluded his run for a second title by beating out Dutchman Stefan Groothius and Korean Tae-Bum Mo in the competition’s final race, winning in 1:08.76.

“[The 1000m] was an essential race for me today, especially since I didn’t have a good one yesterday…[T]here was a lot of pressure on me today and I came through really strong. I’m very happy with the result.”

Despite finishing stronger than the rest of the field in the four-race competition, Shani’s emphatic final-pair victory over sprint-specialist Kyou-Hyuk Lee wasn’t enough to close the gap the Korean opened after a spectacular 500m win earlier in the day.

Overall, Shani joined Lee (1st) and Mo (2nd) on the podium. “Of course I would like to have won, [but] it was a very close competition between four skaters; I could have easily been off the podium but was able to prevail through my strong 1000. To finish third among the true Korean sprinters is something special.”

From The Netherlands, Shani returns to Salt Lake City to prepare for next month’s World Allround Championships in Calgary, Canada, Feb. 12-13, where he’ll also be among the favorites to win.

“My main focus this year has always been Allrounds,” says the 2005 and 2006 World Champion.