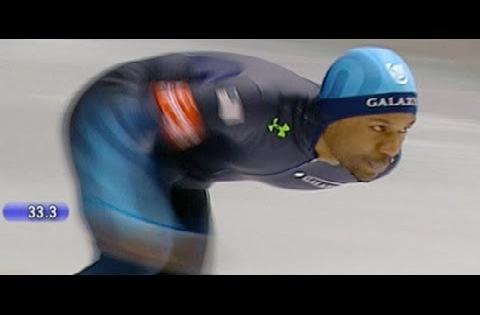 Shani Davis continues to gather momentum on the 2012 campaign trail.

In a pivotal World Cup race at Norway’s hallowed Vikingskipet, Shani’s first 1500m victory of the season moved him to the top of the overall 1500m World Cup leaderboard.

Davis skated 1:47.08, just .13 ahead of Norway’s Havard Bokko (1:47.21), who had staked a short-lived lead in the previous pair in front of a roaring hometown crowd. Although Shani’s winning time was well off his own World Record 1:41.04 and his season-leading 1:43.81, the three-time 1500m World Champion was grateful for the result:

“I”m happy to get the win, especially on a track with such history as the Viking Ship and in front of such loyal and knowledgeable fans. It was definitely my best effort.”

“There’s still lots of work to do but I’ve improved every time I’ve raced. I’m just happy to be moving forward and making progress,” said Davis.

The 1500m World Cup triumph was the 14th of Shani’s illustrious career and moved him within four wins of all-time leader Adne Soendral of Norway (18).

Shani will skip the Allround World Championships next weekend in Moscow to concentrate on the remaining World Cup events, including the World Cup Final in Berlin, followed by the World Single Distance Championships in The Netherlands.