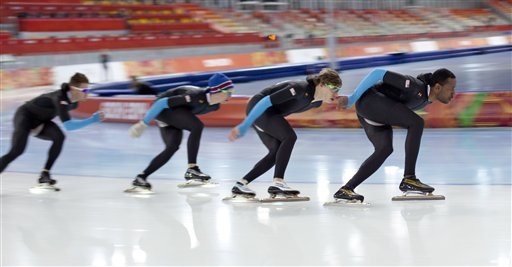 If there is redemption to be found for all-world speedskater Shani Davis in Sochi, it will have to come in an event he has never raced in Olympic competition.

Coming off two bitter results in his specialty distances, including a career-low 11th place at 1500m, Shani now has his sights trained on the final Olympic speedskating event, the Team Pursuit, where he and his U.S. teammates will try to buck a downward trend and snare an elusive Olympic medal in Sochi.

The Team Pursuit, in contrast with the other speedskating events, consists of two three-skater teams chasing each other head-to-head over 8 laps starting from opposite sides of the track.

Shani has led the U.S. team to more Team Pursuit medals than any other skater, including its lone World Championship victory in 2011. In consecutive World Cup events earlier this season Shani and co. finished second to the powerful Dutch squad, establishing a new national record in the process.

“I don’t have a choice now except to dig deep, look forward, and try to lead myself and my teammates to the best possible result in the Team Pursuit,” said Davis to shanidavis.org

To say that an Olympic medal, even a near-medal, would be redemptive for Shani and the U.S. team would perhaps be understating things.

Coming into Sochi leading the Overall World Cup standings at both 1000m and 1500m, including four wins in six international 1000m races on the season, Davis and the rest of the U.S. team had high but realistic expectations. By all measures Shani was on track to fulfill those expectation, especially after a dominating victory on a low-land track at the World Sprint Championships in Japan in January, where he bested a strong field by a convincing margin. Shani felt and looked good on the Sochi oval and, most importantly, had a high level of confidence ahead of the 1000. He was the consensus man to beat.

But although Shani – and much of the speedskating world – has been at a loss to explain the sub-par results, he refuses to allow the past to dictate the future.

Said Davis: “I can’t explain it, but I know I can’t look outside of myself for the cause. Right now I’m only concerned about the Team Pursuit. We have a chance at a medal despite not winning one yet. If we can come together with all of the adversity…[i]t would go a long way.”

The Team Pursuit quarter- and semi-final rounds will be contested on Friday ahead of the Saturday final.