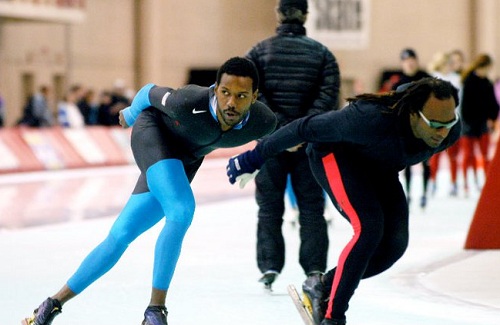 All-World speedskater Shani Davis is preparing to pick up the pace of his blazing speedskating career.

This weekend the two-time Olympic Champion takes to the start line for the 2011-2012 racing season, marking 10 years since he qualified for the first of his three Olympic Teams, initially as a short track skater.

Shani returned to his short-track roots this summer in Salt Lake City with an intensive training regimen conducted by U.S. National Short Track Coach Jae-Su Chun. “[This year] I wasn’t coming off of the Olympic season and i didn’t need to rest and recover as much. Last year i took 2 months off, this year only 1 month, so i am hoping that extra month of short track skating and training will help with overall fitness and strength.”

Davis also never strayed far from the track where he has mined gold every year since 2002: “This summer I was determined to get on the long track about once a week, working on technical things i felt i could have improved on from last year.”

The 1000m and 1500m World Record Holder is trusting that his hard work and methodical approach will lead to even more trips to the podium this season: “Being ready for the biggest competitions – such as the World Single Distance Championships – is always the goal: i would love to try to win both my individual strengths, and improve in the allround and sprints – fast enough to maybe get a new personal in the 1000m and 500m.”

The 29-year-young Davis also feels wiser than a year ago: “Last year my focus was too broad. Part of getting better is learning from my mistakes: last year, racing too much was one of them.”

Shani’s 2011-12 campaign opens November 4-6 with the U.S. Single Distance Championships in Salt Lake City, where the nine-time National Champion will defend the 1000m and 1500m titles he won last season.

Following the opening World Cup events Shani returns to his home training base in Milwaukee, Wisconsin to prepare for the U.S. Championships, Dec. 13-18.