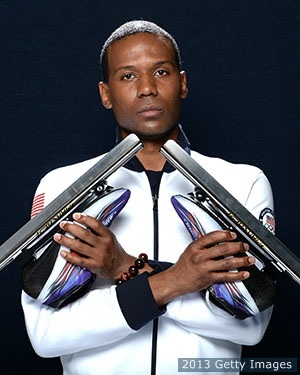 Call him the Chicago Defender.

On the eve of what is shaping up to be an epic 1000m battle at the Adler Arena in Sochi on Wednesday, Feb. 12, twice-defending Olympic Champion Shani Davis is poised for his long-awaited date with destiny.

But now Davis can become the first man in his sport – and the first U.S. man from any sport – to win in three different, and consecutive, Olympic Winter Games.

Shani gets two bites at the golden apple, first at 1000m, where he has a chance for an unprecedented three-peat, then again on Saturday, Feb. 15 in the 1500m, when he’ll strive to improve on consecutive Olympic silver medals.

Shani opened his 2014 Olympic campaign in the 500m on Feb. 10, using that race to hone his sprint speed and shake out nerves ahead of the 1000m. He finished as the top U.S. skater (after placing 4th at the U.S. Olympic Trials in Dec.) and, more importantly, put in two solid races that left him “moving in the right direction,” according to his Twitter feed, where he also asserted that “the best is yet to come.”

The battle lines are cleary drawn: at 1000m Shani faces a Dutch contingent that has swept the men’s speedskating medals so far in Sochi. He’ll race one of them – good friend Koen Verweij – out of the outer lane in the third-to-last pairing. In 2010 Shani won gold from the outer lane.

Shani also faces stiff competition from the likes of 2013 World 1000m Champion Denis Kuzin of Kazakhstan, who races in the evening’s final pair, from Korean Mo Tae Bum, and from his own U.S. teammates, two of whom have podiumed on the World Cup this season.

Davis is also eligible to compete in the Team Pursuit, the speedskating competition’s final event on Feb. 22, where the three-skater U.S. squad is named by coaches. Shani led the U.S. Team to it’s lone World Championship victory, in 2011, and he has since become the most decorated U.S. Team Pursuit skater, contributing to 10 total U.S. medals in the event.

Medaling in multiple events in Sochi would give Davis more Olympic podium finishes than any other U.S. male speedskater. Just don’t tell him that: “I don’t focus on the titles, that’s something for other people to do. [I]’m just focused on skating fast.”

Russia has already hosted two of Shani’s greatest career accomplishments: Davis won the first of two consecutive World All-around titles in Moscow in 2005, and in 2009 he won the World Sprint Championships, also in Moscow.

Shani arrived in Sochi in top form, having won four of six 1000m races on the international circuit this season, including a dominating victory in his last race before these Games, at the World Sprint Championships last month in Japan, where the current 1000m World Record Holder skated under 1:09 on a low-land track for the 32nd time in his remarkable career. Shani owns the top-10 fastest 1000m times ever skated at sea level. Sub-1:09 in Sochi may well be good enough for gold.

Said Davis to a camera crew at the Adler Arena, which hosts the Olympic speedskating events: “I’m prepared. It doesn’t matter about the ice condition or the venue. [I]f it’s my time, it’s my time. I’ve worked hard for a long time and I’ve paid my dues.”

With all eyes on Shani at the oval, and with some of the world’s foremost Olympic sponsors already in his corner, including McDonalds, AT&T, United, Ralph Lauren, Deloitte, and others, it may just be Shani Davis’ time.