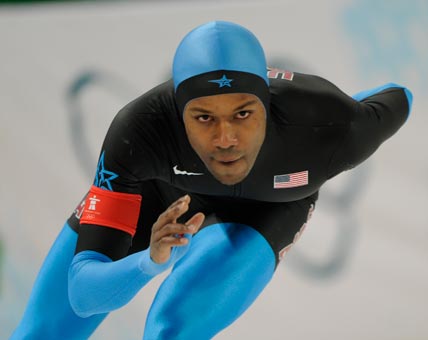 The symbolism of the Olympic Games’ Closing Ceremony was not lost on Shani Davis.

As one of thousands of athletes who came into Vancouver’s BC Place in one delegation, without regard to nation, sport or even Olympic finish, Shani left the 2010 Games as he began it: finding joy in effort and inspired by the power of sport to bring people together. “It’s all about the human family. It’s easy to lose sight of that in the heat of competition.”

Although the Olympic flame won’t be lit again for Winter athletes for another four years, Davis will keep it burning in his own heart: “I don’t feel complete yet in my Olympic career. Right now I’m motivated to be there again.”

The prospect of participating in Sochi, Russia, also excites Shani: “Some of my best skating memories are from Russia. It’s where I won my first World Championship and World Sprint Championship.”

Shani closes another Olympic chapter, but he’ll continue his pursuit of speedskating excellence in 2010 for another two weeks. Following the Olympics he leaves for Europe to defend his Overall World Cup titles in the 1000 and 1500 meters. The 2010 season ends March 12-14 with the World Cup Final in the speedskating-loving Netherlands, where he’ll be celebrated on par with Olympic champions from that country.