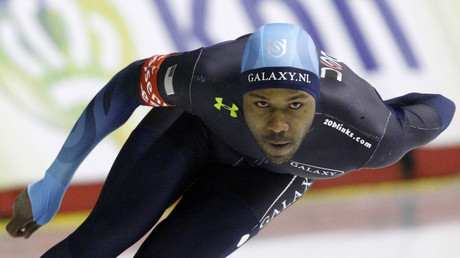 Showing sleek form and supreme fitness, Shani covered 1000m of the Utah Olympic Oval in 1:07.69, a quarter second better than 2nd place Stefan Groothuis of The Netherlands (1:07.94). His blistering final lap of 25.8 seconds was nearly a half-second faster than the rest of the field.

Said Shani of his home-ice wins: “It’s a great way to start the beginning of the rest of the season. And it was great to see so many fans out here cheering skaters from all over the world.”

Earning 100 WC points for each win, Shani vaulted from 6th to 2nd in the overall 1000m World Cup standings and now trails Groothuis by only 60 points with two 1000m contests remaining.

With his 33rd and 34th career 1000m wins on the World Cup circuit, Shani overtakes sprint legend Dan Jansen for most single-race WC victories by a U.S. male skater. Jansen won 32 times at 500m in his World Cup career and 46 times total, including 14 at 1000m.

With his 46th and 47th World Cup victories, including 13 at 1500m, Shani now stands 3rd all-time among male speedskaters, needing only two more trips to the top of the podium to surpass German sprint legend Uwe-Jens Mey.

“Hopefully I’ll get faster as I continue to race. The (Sochi) Olympics are still the biggest goal, so hopefully I can climb the ladder all the way up to 2014.”

The Oval in Salt Lake City is where Shani’s Olympic career began back in 2002, when he qualified for the first of three U.S. Olympic Teams, then as a short-track speedskater. Shani has spent the past several summers training in Salt Lake City with the U.S. Short-Track National Team, honing his ability to navigate turns at high-speed, a critical factor on the super-fast Salt Lake oval.

[Photo: Getty Images, via US Speedskating]