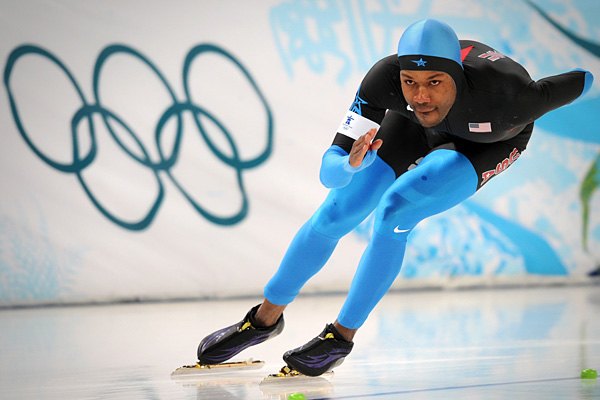 VANCOUVER, OLYMPIC OVAL – 20 FEB 2010
Shani Davis gave it all he had in the Mens 1500 meters but it wasn’t quite enough to become the Vancouver Games’ first double-gold medalist.

Finishing second days after he won the 1000m Gold Medal, Shani matched his performance at the 2006 Torino Olympics.”I really wanted that 1500, it’s the race of kings…but I could not have tried any harder than I did today.”

With every last ounce of fight and determination he could muster, Davis crossed the line .53 behind the Netherlands’ Mark Tuitert, who reached beyond himself to earn his speedskating-crazed country its first 1500 meter Gold Medal since the legendary Ard Schenk in 1972. “I’m very very happy for Mark. He’s overcome a lot of adversity in his career to get to this point,” said Davis.

Racing in the 19th and final pairing of the day, Shani faced a long last outer turn and no real advantage from his pair, who was never in sight after the first 200 meters. Said Davis, “They say things happen for a reason, and I’ll have to draw my lessons going forward to Sochi in 2014.”

Davis concludes his 2010 Olympic campaign with two Olympic medals to go with the two he won in 2006.He now has a total of two Olympic gold and two Olympic silver medals.

Shani will have to cheer from the sidelines during the two remaining Olympic races, the 10,000 meters and the Team Pursuit.He withdrew from the 10,000 in January, and he is not eligible to compete in the Team Pursuit according to the rules of his sport’s National Governing Body, US Speedskating, and the U.S. Olympic Committee.

“I’m going to take a few well-earned days off, relax, and really enjoy the rest of my Olympic experience…watch my friends in Short Track, and support the other skaters.”