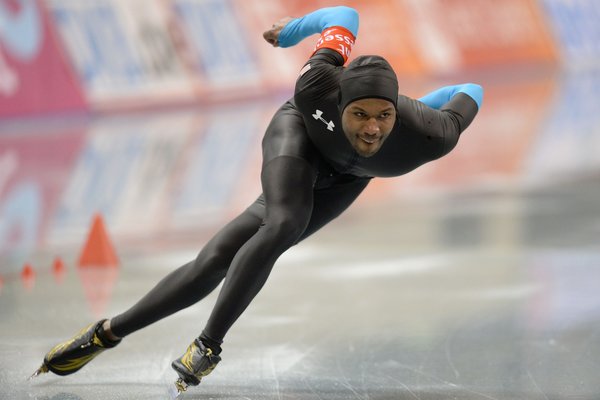 Shani Davis has always been known for great finishes.

Competing on the final day of the 2014 World Sprint Championships in Japan, Shani closed with a flourish once again, dominating the 1000m race and displaying great sportsmanship at 500m in the last event before the Olympic Winter Games next month in Sochi, Russia.

Racing head-to-head with Kazakhstan’s Denis Kuzin, last season’s 1000m World Champion, Shani triumphed in a blistering 1:08.96, nearly eclipsing his six-year-old track record (1:08.92) at the M-Wave oval, site of the 1998 Olympics and the venue where Davis won the first of three 1000m World Championships in 2008.

It was Shani’s 7th career 1000m gold medal at World Sprints to go along with four silver and three bronze.

Shani’s remarkable winning time was more than a half-second ahead of second-place Kuzin (1:09.54) – the Kazakh skater had edged Shani in the first 1000m – and one full second ahead of third place Michael Mulder of The Netherlands (1:09.96), who successfully defended the overall World Sprint title he won last year.

At 600m Davis and Kuzin were locked in a dead heat (42.40) before Shani roared over the final 400m (26.5) as he has done so many times before. The two-time Olympic Champion’s lion-hearted effort was a dramatic reminder to Kuzin and others that Shani is determined to extend his Olympic 1000m reign.

It also marked the 32nd time Shani eclipsed the 1:09 barrier on a low-level track, a powerful closing statement ahead of Feb. 12 when the Men’s 1000m will be contested at Sochi’s Black Sea oval. Davis was the only man under the mark in each of his two Olympic gold medal-winning performances, first in Torino (1:08.89) and again in low-land Vancouver (1:08.94). Shani owns the top 10 fastest low-land times ever skated.

“It was a strong race,” Shani told Dutch broadcaster NOS following the event. “I’m happy that I can leave this competition with a good feeling in the 1000m. [And] I still feel the best is yet to come.”

In the contest for the overall title Mulder prevailed by dominating the two 500m races, taking the combined 2x500m/2x1000m competition by .8 of a point over Shani, who garnered overall silver.

Mulder’s winning margin was aided by Davis in their day-two 500m pairing when Shani, racing from first inner lane, noticeably eased up to let Mulder go ‘over-the-top’ on the backstretch crossover rather than risk impeding the Dutchman on his way to sure victory.

Said Davis: “it was an instinctive split-second decision [to ease up]. I’m sure he would have done the same for me if we were in the opposite positions.”

Reclaiming the World Sprint Champion mantle in Nagano was not Shani’s main concern, however, as he told shanidavis.org before the competition began: “My priority [at Sprints] is only to put in some solid races and work on my speed before Sochi.”

Davis was pleased to add to his collection of happy memories in Nagano: “Japan has always been one of my favorite spots, so it’s the perfect place and time to get ready for the Olympics.”

Following additional training and relaxation in the Land of the Rising Sun, Shani heads to central Europe before making his final approach into Sochi in early February.