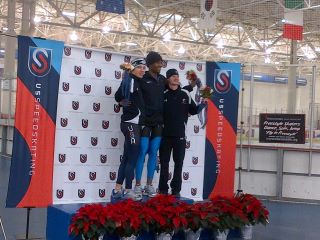 On the heels of a sub-par fall World Cup campaign, the two-time Olympic Champion and nine-time World Champion got some of his mojo back, picking up more golden hardware from the U.S. National Championships at the Pettit Ice Center here.

In a much anticipated showdown of the country’s top middle-distance speedskaters, Shani dominated the 1500m. Following his 1000m victory two days prior, Shani put the pedal down for the “race of kings”, completing three-and-three-quarters laps of the Pettit oval in 1:45.19, more than two full seconds ahead of runners-up Jonathan Kuck (1:47.2) and Brian Hansen (1:47.4), who couldn’t match Shani’s speed or finishing power.

On Tuesday, Shani earned silver in the Allround 5000m competition (7:30.82), and followed up with bronze in the Sprint competition’s two 500m contests on Wednesday (71.20 combined), finishing second overall in the final sprint standings to pure-sprinter Tucker Fredricks.

Following the Championships Shani prepares for the second half of the World Cup series and the season’s ISU Championships.