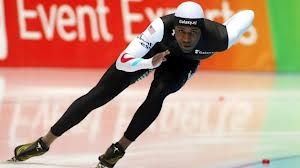 Gold and Sliver are clearly the preferred elements of all-world speedskater Shani Davis.

Re-starting the 2012-13 World Cup season, Shani picked up medals of both hues in his specialty distance.

In a scintillating effort at the Olympic Oval on the competition’s first day, Davis reminded his competitors that he’s still the man to beat at 1000 m.

Racing in the penultimate pairing on the outer lane, Shani held off overall World Cup leader Kjeld Nuis of The Netherlands by .15 to earn his second international 1000m victory of the season and 100 precious WC points.

Apparently recovered from a November groin injury that hobbled him at the fall World Cup events, Shani stopped the clock at 1:07.49 in a race that included the day’s fastest first and last laps. It was also the fastest 1000m time skated in the world so far this season.

It was the U.S.-best 53rd World Cup win of Davis’s illustrious career, including an all-time-leading 36 victories at 1000m.

Shani owns the 1000m world record of 1:06.42, which he set in 2009 at the high altitude oval in Salt Lake City, site of next weekend’s World Sprint Championships.

On the competition’s second day Shani out-dueled Nuis in the final pairing, chasing down the Dutchman in the homestretch with a field-best 26.0 final lap. Despite that rewarding finish, Shani’s time of 1:07.83 came up .07 shy of another Dutchman, Hein Otterspeer.

The weekend results moved Shani to within just 35 points of new WC leader Otterspeer in his pursuit of a record sixth Overall 1000m World Cup title. Davis also closed the gap in the race for the season’s Grand World Cup, moving to within 4 total points of The Netherlands Jorrit Bergsma.

“Overall, a huge step in the right direction,” said Davis after the competition. “I’m getting closer to where I want to be in terms of results and am very excited about the remainder of the season.”

Shani will have a few weeks to refine his form and fitness before heading to Europe for the remaining World Cup and World Championship events.