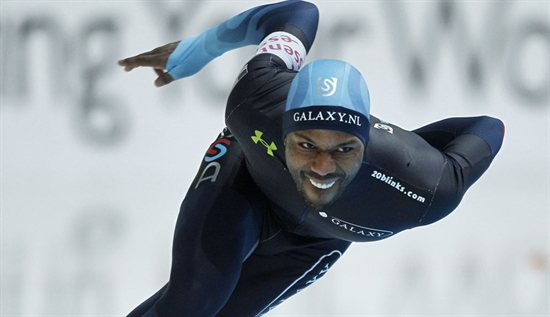 Shani Davis gained a measure of redemption at the season’s second World Cup.

Despite a rare podium miss in the competition’s opening 1500 meter event, Shani moved closer to the overall World Cup lead by prevailing in the day’s featured race.

Skating in the final pair – always reserved for the World Cup’s top-two point leaders – Shani edged Stefan Groothuis in a dramatic battle to move within 5 points of the overall 1500m lead held by Groothuis, who finished 6th on the day, and who had gained the overall lead by defeating Shani head-to-head at the season-opening World Cup in Russia last week.

With a furious finishing kick in Astana, Shani wiped out a large lead Groothuis had established over 1100m, completing the final 400m nearly one second faster. Despite turning the tables on the Dutchman, Shani’s time of 1:46.21 wasn’t quite enough to improve on his 13 career 1500m World Cup wins, second all-time.

On day two, in his first 5000m race of the season Shani posted a time of 6:28.11 to win Group B. He also posted the fastest final lap (29.9) among all competitors and was the fastest U.S. skater in the distance. The win also moves him into Group A, which was won here by Dutch superstar Sven Kramer (6:13.8).

In the 1000m race on the competition’s final day, Shani managed to move up one spot in the overall 1000m World Cup standings despite being edged off the podium by Korea’s Tae-Bum Mo by 1/100th of a second.

The fall World Cup series makes its third and final stop in Heerenveen, The Netherlands, Dec. 2-4. Shani then returns home for the U.S. Championships in Milwaukee Dec. 13-18.