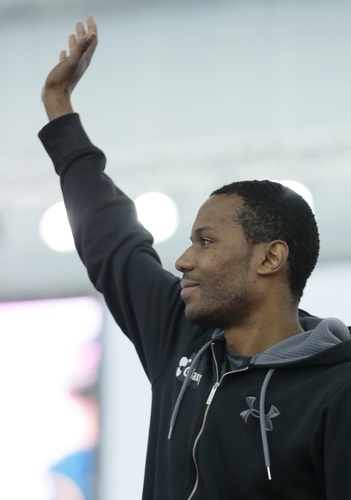 After missing the podium on Friday at 1500m, the resilient Davis found his form on Saturday at 1000m, dominating the field for his 3rd straight international victory at the distance to open the Olympic season.

Racing in the final pairing with Kazakhstan’s Denis Kuzin, who upset Davis and others to win last season’s 1000m World Championship in Sochi, Shani put on another kilometer-long clinic, overpowering Kuzin and the field in the final lap to win in 1:08.66.

Said Davis following the race, “I didn’t come out with enough attack (at 1500m) so I was more determined from the start (at 1000m). I’m pleased by the result, and I have a good idea about how I’ll need to prepare for the track in Sochi.”

The WC triumph follows victories in Calgary and Salt Lake City and puts Shani on course to win an unprecedented 6th World Cup Overall title at 1000m, which would bring him within one of the career mark established by Wotherspoon, who claimed seven 500m titles in his 14-year World Cup career.

Shani wraps up the Fall World Cup campaign next weekend in Berlin, where he’ll try to recapture the Overall WC 1500m lead and win a fourth straight 1000m race.