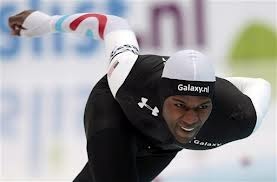 It wasn’t the 1000m result that he’d hoped for, but Shani Davis inched closer to the overall World Cup 1000m lead today.

Racing in the penultimate 1000m race of the World Cup season, Shani finished eighth on the day but managed to pick up ground on the overall leaders in a race that was won by fellow Illinoisan Brian Hansen, who picked up his first career World Cup victory.

Shani, a two-time 1000m winner this season, now sits third in the overall WC standings, just 26 points behind leader Kjeld Nuis of The Netherlands. With a victory in the World Cup Final next weekend, where points are multiplied by 1.5, Shani can still claim a record sixth Overall World Cup 1000m crown.