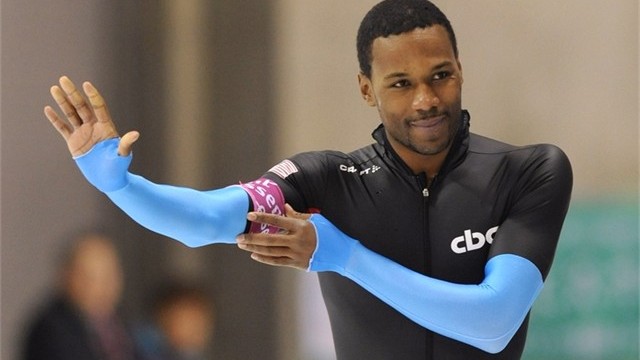 The world’s most versatile speedskater closed out 2010 with a dominant performance over four distances at the two-day U.S. Allround Championships.

With berths on the 2011 U.S. World Allround Championship Team at stake, Shani Davis won the 500m, 5000m and 1500m and added a silver in the grueling 10,000m. His combined ‘samalog’ point total of 148,56 bested the rest of field by over two full points, remarkable given that the field included the 2010 World Allround Silver Medalist and the most recent 1500m World Cup winner.

Day two saw Shani win the 1500m in 1:42.95, the fasted time posted in the world this season and nearly two seconds ahead of Marsicano, who won a Fall World Cup event at the same distance.

Equally impressive was Shani’s Silver Medal win at 10,000m. In a race ten-times as long as his best event, Shani managed to stay within ten seconds of Kuck, a distance specialist. “I surprised myself in the [distance events]; i haven’t skated a 10k in 2 or 3 years so i was happy with the outcome.”

The results were also an affirmation that Shani is on the right path: “I struggled in the beginning of the season and now i am finding my true form and fitness. My technique is changing and i am embracing the fact that these things take time to develop.”

Though pleased with earning another U.S. Allround Champion title — seven since 2003 — Shani’s eyes are squarely on the prize of podium finishes on the International Skating Union circuit: “I am focused more on the effort of being the best i can possibly be for the [ISU] Championships…[and] the challenge of trying to rise to my top form and compete against the world’s best.”

Davis will also compete in the World Single Distance Championships to close out the season in March. There, the reigning 1000m & 1500m World Record Holder will focus on defending his 1500m title and reclaiming the 1000m title that escaped him in 2009.

Shani’s resolution for 2011? “I will have fun and push myself…[I’ve] worked hard and will continue to do so until i am 100 percent satisfied with my improvement.”