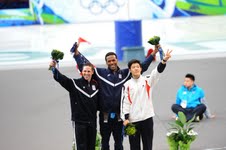 Racing in the last of 19 pairs in the 1000 meter race that he was expected to win, the unflappable Davis kept his composure amid one of his most hyped speedskating races to repeat his triumphant performance of the 2006 Olympics.

No male skater in Olympic history has successfully defended a 1000 meter gold medal, though several have defended gold at other distances. Davis becomes the first U.S. skater to defend an Olympic gold medal since Bonnie Blair accomplished the feat twice in the 500.

After a strong opening 200 meters, Shani skated a blistering 400 meters at 25.2 seconds and then held on just long enough to go under 1:09 seconds, the threshold he predicted would win the race. “If I hadn’t nailed that last outer turn I wouldn’t have finished first…That race took everything I had — physically and mentally….I went as fast as I could go…I’m very very happy.”

Davis now prepares for the 1500 meters on Saturday, February 20, where he is also a race favorite and the current World Record Holder.