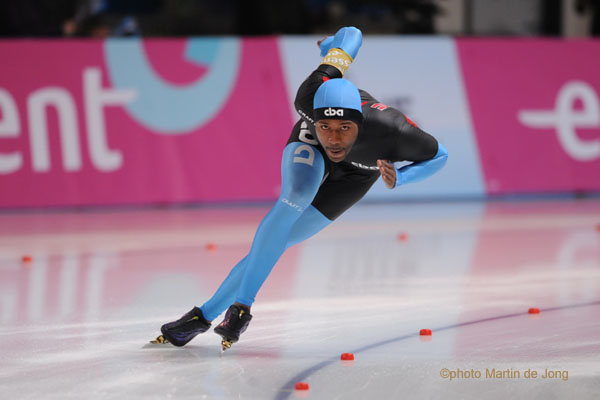 Unfazed by a sub-par 7th place finish at 1500 meters the day before, Shani Davis summoned the resiliency and mental toughness that has made him the world’s most successful active speedskater.

In the second stop of the 2010-2011 ISU World Cup circuit in Berlin on Sunday, Shani raced around the oval in 1:08.82, besting the rest of the world’s fastest skaters for his second 1000 m victory of the young season and 11th consecutive since 2009. Finishing second was Korean skater Kyou-Hyuk Lee in 1:09.08, followed by Dutch and Norwegian skaters.

Minutes later he joined U.S. teammates Jonathan Kuck and Trevor Marsicano to bring home gold in the Team Pursuit event, defeating powerful teams from The Netherlands and Norway and establishing the U.S. as the team to beat this season.

In Saturday’s 1500 meters, Shani found himself off the podium for the first time in over two seasons. That race followed 18th and 19th place finishes in the event’s two 500 meter competitions. Those results didn’t shake the defending World Cup Champion’s confidence, however: “[I’ve just] got to fix shop.� I’ve got it all down on paper. I’ll be fine.”

True to his word, Shani remained poised and powerful at 1000 meters, the competition’s penultimate race. Skating from the last pair, which is reserved for the overall World Cup leader, Shani made up a half-second deficit over the race’s final 400 meters, as he has done so many times before. “It was a great experience to have it [in Heerenveen], lose it, and then, on the very last day, being mentally depleted, to come back strong and win.”

Shani and his U.S. teammates clocked 3:43.10 in the 3000 m Team Pursuit, skating the race’s final two laps in a blistering 28.2 and 28.1 seconds, respectively, good enough for a 1.5 second victory over the team from Norway. “I’m happy with the overall results and the knowledge gained from [this part of] the journey.”