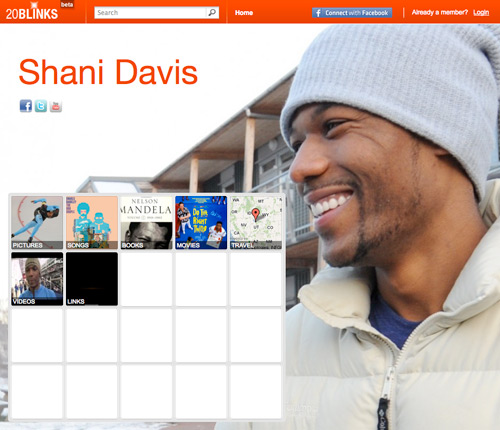 1 February 2011 – Olympic and World Champion Shani Davis is taking a share in 20BLINKS, a privately owned internet company founded by Dutch entrepreneurs Bastiaan Zwaan and Sandra & Barry Hay (of Golden Earring fame). The speedskating Maestro will be sporting the 20BLINKS.com logo on his clothing while racing and training, and he will be sharing his favorite pictures, movies, videos and books at 20BLINKS.com.

Davis, twice Olympic 1000m champion, is the current leader in the ISU World Cup 1,500 meters. He recently came off a double victory at the U.S. Championships, winning both the Sprint and Allround competitions. In the process, he also skated the fastest times in the world this season over both 1000m and 1500m.

Shani’s international racing season picks up in January with the World Sprint Championships in the Netherlands (22-23 January), followed by the World Allround, World Cup Final, and World Single Distances Championships.

20BLINKS.com was developed by 20BLINKS b.v., a privately owned company founded in the Netherlands. 20BLINKS.com helps users save and share their lives with friends through building and browsing personal collections of videos, books, pictures, movies and music, molding the web into a truly custom content experience. 20BLINKS presents content as an expression of yourself. More information at www.20blinks.com.