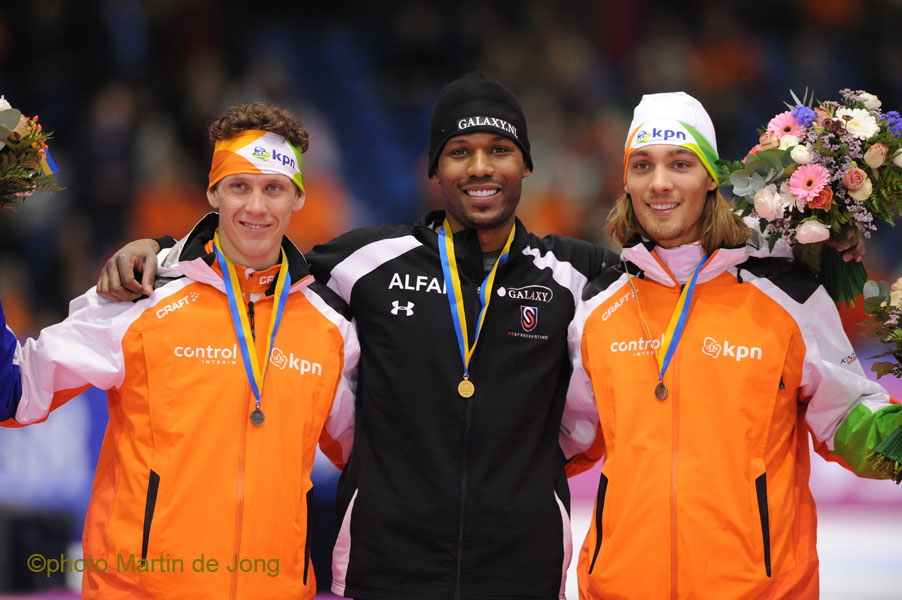 Shani Davis is soon to became only the second man to reach 50 wins on the World Cup circuit after a crucial 1000m victory in the cradle of speedskating.

Racing in front of a legion of orange-clad fans in a must-win situation at The Netherlands’ famed Thialf oval, Shani held off a quartet of Dutchman to claim his fifth straight World Cup win, including three at 1000m.

Paired with Overall WC 1000m leader Stefan Groothuis, who had the advantage of starting and finishing on the inner lane, Shani dug deep on the last outer corner to stop the clock at 1:08.88 to Groothuis’ 1:09.00.

It was an impressive win for the longtime king of middle-distance speedskating.

The two-time Olympic Champion now has an all-time-best 33 career 1000m World Cup wins to go along with 15 at 1500m. Shani has also anchored the U.S. Team Pursuit squad to three World Cup victories.

Shani’s latest 100-point victory brings his 1000m WC total to 450 points, trailing only Groothuis (490). Despite missing the podium in the season’s first three 1000m races in the Fall, Shani still has a chance to claim the top spot next weekend in Berlin at the World Cup Final, where points are multiplied by 1.5.

On Friday Shani won the 1500m race to extend his Overall World Cup lead at that distance. The 1000m and 1500m World Record holder is looking to win another Overall World Cup title next weekend in Berlin, including a record 5th straight 1500m crown.

Shani will conclude his remarkable Winter 2012 campaign at the World Single Distance Championships in The Netherlands, March 22-25.