Shani Blogs for TeamUSA on Road to Sochi 2014 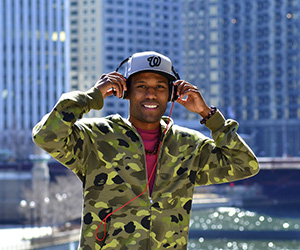 The revelations will be televised! Or at least blogged about.

Over the next year leading up to the 2014 Olympic Winter Games in Sochi, Russia, All-Galaxy speedskater Shani Davis will reveal personal insights and observations during his historic journey with readers of the Team USA blog.

The two-time defending Olympic Champion and ten-time World Champion joins several other prominent and aspiring U.S. Winter Olympians who are chronicling their Road to Sochi 2014.

In Shani’s case, however, readers get a once-in-a-generation opportunity to trek with an athlete who is setting out to accomplish what no male U.S. Winter Olympian has ever done: win an Olympic Gold Medal in three straight Games.

“I’m excited about this opportunity and honored that [TeamUSA] chose me for the Road to Sochi blog. I don’t really get to write that often, so I’m glad I’ll get to brush up on that art, too.”

The former Northern Michigan University english student and one-time Stephen Colbert foil is only just entering the blogosphere, but the pioneering Davis has been using social media to connect directly with his speedskating fans since before the 2010 Winter Olympics via his Facebook Fan Page, Twitter, and even his own YouTube channel, where he webcast “Shani On Shani” segments throughout the Vancouver Games.

So just how personal will the relatively-elusive speedskating star get?

“I’ve always treasured my privacy, and I still do, but I also recognize that a lot of people’s lives are enriched by my skating success. I won’t be sharing any trade secrets or anything, but hopefully people will be entertained and maybe even educated, especially about my favorite sport.”

Shani’s first installment is partially excerpted below. Full posts can be read on Team USA’s “Road to Sochi 2014” blog: http://www.teamusa.org/Team-USA-Winter-Bloggers/Shani-Davis.aspx

“My curiosity has finally been fulfilled. For four years I wondered what the host city of the 2014 Olympics would be like. I heard so much about this tropical summer resort, this “Russian Paradise.” Whenever I think of Russia from past personal experiences I think of snow, bitter cold, gloomy grey skies, and very tough conditions. These first thoughts probably also came from Rocky IV, where the hero had to travel to Russia, adapt to the environment, and face a powerful opponent.

We flew to Sochi on a chartered flight. I took a window seat because I wanted to finally put to rest all my doubts and these absurd rumors of white sand beaches and palm trees! I’ve been to Russia about five times before – I won my first World Allround Championship title in Moscow – and never saw white sand beaches, so I thought people were playing with me.

We descended into Sochi and at first it was rather normal, until I saw sunlight reflecting perfectly onto the Black Sea. It was so beautiful: palm trees guided our landing! I was thrilled to be in a tropical climate and staying at a summer resort rather than in a cold snowy town similar to those I previously experienced in Russia, Rocky style.”