For Shani, Sharing is Elemental 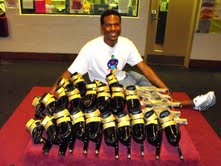 Where does an Olympic Champion keep his Gold Medals? For the next few months, the Gold that Shani mined in Torino and Vancouver is on display at Chicago’s Field Museum. Shani is generously loaning his precious hardware to the museum for its Gold Exhibit through March 6. view Chicago Journal news article and NBC Chicago news article.

The hero of the Evanston Speed Skating Club also made good on his golden pledge to donate new speedskates to the club where he first learned his craft as a youth. ESSC founder and Shani mentor’s Sanders Hicks gratefully received 10 new youth skates, made by U.S. skate maker Mike Greenland just in time for the new season.

Despite a rigorous training schedule in the lead up to the World Cup season, Shani also made time for charitable appearances in Chicago on behalf of World Sport Chicago and the Michael Rolfe Pancreatic Cancer Foundation, where he graciously auctioned private skating lessons for up to four lucky youth, with all proceeds going toward finding a cure for pancreatic cancer.