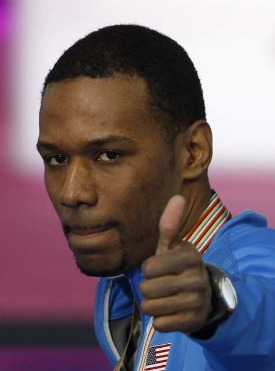 The countdown is underway to the start of the international racing season and all-world speedskater Shani Davis is ready.

With under 500 days remaining before the Opening Ceremony of the 2014 Olympic Winter Games in Sochi, Russia, Shani is on target to contend for an unprecedented third-straight Olympic gold medal.

Even before the launch of the 2012-13 ISU World Cup, this month Davis already established a new mark for middle-distance excellence, claiming another top spot in the Dutch “Adelskalendar”, speedskating’s hallowed record book that ranks the personal best (PB) times of every athlete in the sport’s history.

The 2012-13 racing season will take the world’s top speedskaters to all of the familiar places – The Netherlands; Norway; Germany, Japan, Salt Lake City – but it is the last event on the ISU calendar that has Shani’s full attention: The 2013 World Single Distance Championships, which will be contested 21-24 March at the new Olympic oval in Sochi.

This season Shani looks to build on his national-best 51 World Cup wins – second all-time among men – and extend to 10 his streak of consecutive years with at least one World title.

Shani’s first major contest this season is the 2012 U.S. Single Distance Championships, held in Milwaukee, USA 2-4 November, where he looks to defend his national titles at 1000m and 1500m.